Previous articleWhiplash: Sweat and Blood
Next articleWarlords of the Wasteland – Prologue

A low voice whispered filling him with a sense of desperation.

A reflection was staring down at him with deep amber eyes and red face. It was all twisted, cringing in pain and almost crying. This couldn’t be him, he thought, this couldn’t possibly be a mirror. Where was he and who was the man he was looking at? His features were so familiar and he was so close that he could almost touch him. He could even smell him, a foul smell that chocked him and made him sick to his stomach.

The low voice returned this time much more commanding.

Who kept saying that? Was it the man in front of him? Couldn’t be, his lips weren’t moving at all and if they did, he was sure a loud scream would come out of his mouth instead of a low whispering voice. He tried to reach him moving forth a long index finger. A twisted index finger came out from the other side trying to reach back and… vanished beneath tiny ripples disturbing the man on the other side.

It wasn’t a mirror after all, it was water or liquid of some sort, fouler and sickening red. Could this be blood? YES, YES, a pool of blood and he was staring right into it. That was where the smell was coming from, chocking his dormant senses and that’s when he realized the man looking up to him was indeed his own reflection.

He screeched in horror.

The voice gathered intensity deafening him for a moment.

When he came back to his senses, he looked at his hands: they were both bloodied and twisted. He touched his sore, sweaty face and felt the blood dripping down his chin to the hard, cold ground. He created that pool in which his own reflection was reaching him for help. His knees were pressed on the hard ground, all bruised and aching as if ready to collapse.

Around him, he could almost hear a faint hum.

The voice encouraged him softly.

He hacked from all the blood and stared once more at his own haggard reflection. Am I hallucinating? Where am I? he asked himself in a hoarse voice. What kind of a hoax is this? He felt hopeless and hounded by countless mocking eyes. The hum became more and more distinct: HA’s and HO’s was all that he could hear… bursts of uncontrollable laughter.

The voice repeated hastily and anxiously.

He finally looked up in terror. The voice was still ringing in his ears and the HA’s and HO’s were gathering more and more momentum. Around him, white collars encircled him, pointing at him, all mocking him. They were all wearing custom-made, perfect-fit suits and snow-white long-sleeved shirts with black socks and matching fine-polished leather shoes. All had fresh haircuts and all probably used face cream on a daily basis. All trying to be perfect, yet all dim, characterless and sad. All nothing but a giant hoax themselves.

The voice urged him.

He also noticed a shadow moving behind the lines encircling the white collars and taking them one by one without the others noticing. All of them were busy mocking him not paying attention to what’s behind them. Where the shadow would take them, he didn’t know nor would he have wanted to. Darkness spread behind the white collars, a darkness so thick not even light could escape it.

The voice kept repeating on and on and on.

With a painful effort, he shifted one leg moving the knee away from the hard, cold ground and lifting it up high to where his face was. The white collars in front of him suddenly stopped laughing. He looked up and saw fear on their faces. He tried to laugh but instead a loud scream came out of his mouth making his head cock backwards. Others behind him stopped laughing as he was trying to move away his other knee from below him. He slowly stood up, cringing in pain. When he was finally up, all who encircled him weren’t laughing anymore and all had fear written all over their moisturized face. Nobody was making a sound.

The voice too said nothing.

The shadow behind them all was circling frantically disturbed by their silence, trying to find its next victim. Still in pain, with his eyes half-closed, he found his voice and asked them collected:

What are you laughing at?

A loud drumming sound snapped in front of him…He opened his eyes but there was nothing to see….

Darkness filled the room and he could see from his bed the dark storm clouds that were threatening the horizon. Thunder hammered the sky, lightning the room just for a split second. He harked as the thunder came to a halt, letting the big drops of rain loose on the dry shattered land. But there was something else he could hear: the same HA’s and HO’s from his dream and YES, even the voice…

Louder than ever the voice kept coming back on and on and on:

Warlords of the Wasteland – Prologue

Silence… all silent and… still… Afar a great griffin was trying to break it screaming at the great ball of fire that ruled the pale...
Read more 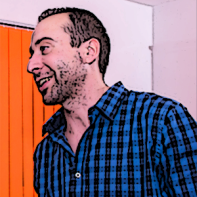 Florian Gheorghe
Freedom Evangelist, self-employed for over 8 years, consciously trying to break the status quo one step at a time. Writing is my ultimate escape, action is my only option.